The ACOM Book Club met on Thursday, February 20, 2020, at Mim's Cafe in St. Paul next to the U of M St. Paul campus. In attendance were Andrea, Jim, Margaret, Francis, Joe, Azad, Peter and me. Some of us ordered supper (schwarma, falafel), others ordered snacks (pita & hummus) or dessert (paklava). Margaret also passed around some nuts to share.

The book for this month was "Beautiful Music" by Michael Zadoorian. A couple of years ago we read his book "The Leisure Seeker" for the book club.

Some of the members who searched the web about the author and the book reported that it was kind of an autobiography for Zadoorian.

A quick synopsis of the book for those of you haven't read it: a young man (Danny) growing up in Detroit reaches his teen years at the start of the 1970s. He is white, while his school is integrated. There is a certain amount of racial conflict at the school. Parts of the city around him show the lasting effects of the riots in the late 60s. His father builds a 'den' in the basement with a stereo and record player and introduces him on how to properly handle record albums (vinyl LPs). His father dies of a heart attack and his mother becomes largely dysfunctional. One thing which helps him to survive is his focus on the music at the time. The book is constantly referring to pop and rock songs from the early 70s.

Azad kicked off the meeting by asking each of the attendees to give their thoughts on the book.

Peter grew up in outer edge of Milwaukee. He didn't have any race riots while he was there, but there was a high level of violence in the city. He grew up listening to the music on the radio, just like in the book.

Jim listened to music as he was growing up. He recognized most of the songs referenced in the book. He had a small transistor radio just like Dan. Because of the area in which he grew up, he didn't really see any non-white people until he was out of high school.

Andrea liked the book. Didn't really recognize most of the music - she was a classical music fan when she was growing up.

I like the book, also. I was very familiar with almost all of the music, even though I was growing up close to 10 years before Dan. I remember getting a small "pocket size" (for a big pocket) transistor radio in my early teens and listening to it quite a bit. I was in a small town in North Dakota, so I also didn't really meet any black people until I was in college, and was totally isolated from any direct effects of the 60s race riots.

Joe said that, other than the mom & dad, the book was similar to his growing up. The book mentions Dan having to take part in swimming boys' phy-ed naked. Joe did also in Rochester, Minnesota, (as did Jim). He noted the way that Dan's father taught him to handle the record albums (just as he learned), the switch from mono to stereo, the way that he was picked on in school. He liked the way that the boy took care of his mother after his father died. Joe also listened to WLS (as did I and Jim).

Azad thought that the book was boring when he first read it. His wife, however, loved it. He knew almost none of the music, but his wife knew all of it. He thought that the writing was very good and he liked the letters that Dan wrote to his dead father.

Margaret knew a lot of the music. She liked the way that the mother wanted to take control of her life after her husband died and her son was grown up.

Note that both Francis and Azad grew up in the Middle East, Iran and Syria. Their unfamiliarity with the music was understandable. Francis remembers having one radio station which played top American hits. They both moved to the U.S. at college age.

Andrea commented on the race relations and riots that the book focused on. They were a sign of the times.

I picked up on Dan and his mother sitting together late at night watching Johnny Carson. I also loved doing that.

Peter recognized the description of the TV. His family had one very similar.

Joe commented on how mention of particular songs calls up a specific year. In his case, a song might be associated with an old girlfriend, by which he can remember when the song was being played.

Andrea thought that Zadoorian had a remarkable ability to focus in on detail in his writing.

The consensus seemed to be that we all liked the book.

For next month we voted to read the new book "The Gimmicks" by Chris McCormick. It turns out that he lives in Mankato, so we're going to hold the March meeting at Azad's house in St. Peter (38323 Timberlane St.). Azad has talked to the author and will ask him to attend the meeting with us. Because of this, the meeting will be moved to Saturday, March 21st, at 3:00 in the afternoon. I hope to see you all there. 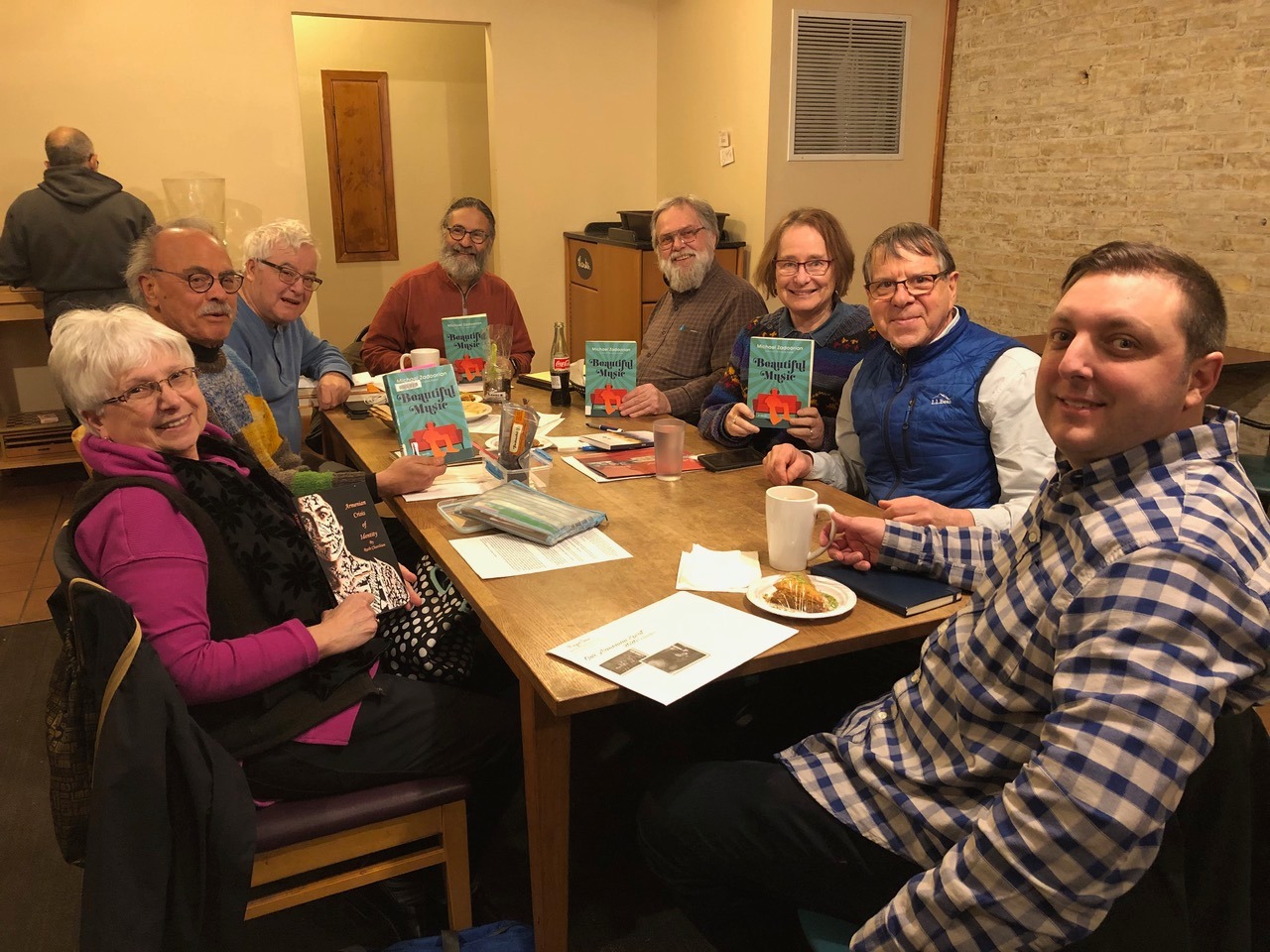 For  April, our book will be "Armenian Crisis of Identity" by our own Ruth Charchian. Ruth will order books for us at wholesale cost and I should have them available in about 3 to 4 weeks. The meeting will be at the Charchian's house in Minnetonka (?) on Thursday, April 16th, at 7:00 PM. (Don't worry, I'll send the specific address before the meeting.)