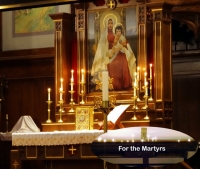 ACOM and St. Sahag Armenian Church sponsored a Memorial Service and program Commemorating the Centennial of the 1915 Armenian Genocide. The memorial was well attended with over 250 people present. Dignitaries from various educational, social, and political institutions gave remembrance speeches while the audience listened with thoughtful attentiveness. The Remembrance began with a prayer service led by Der Tadeos Barseghyan, Pastor of St. Sahag. Remarks from the invited speakers followed.

Dignitaries from various educational, social, and political institutions gave remembrance speeches while the audience listened with thoughtful attentiveness. The Remembrance began with a prayer service led by Der Tadeos Barseghyan, Pastor of St. Sahag. Remarks from the invited speakers followed:

The evening program began with a prayer service for the Martyrs of 1915. Father Tadeos then gave a welcome and presented his comments on the 100th anniversary of the 1915 Genocide. He was followed by Alejandro Baer, Center for Holocaust and Genocide Studies at the University of Minnesota (introduced by Lou Ann Matossian). Max Lundgren, Cellist, played the first of three pieces, Dle Yaman.  Aram Desteian then presented US Senator Amy Klobuchar who spoke on the need to recognize the Armenian Genocide. Senator Klobuchar was followed by Steve Hunegs, Jewish Community Relations Council, (introduced by Der Tadeos) who talked about the relationship and kinship of the Armenians and the Jewsih people who both have a common bond in their respective Genocides. Max then played Hijaz Hayastan. The next speaker was Congresswoman Betty McCollum (introduced by Dr. Joe Tashjian). In her speech she mentioned the Our Father (Hayr Mer) and in it the phrase " as we forgive those who trespass against us.." calling for forgiveness. But she pointed out that the first part of the phrase "Forgive us our trespasses '" applies not only to us but also to the Turkish Government, a powerful thought meaning that there is need to ask others for their forgiveness before forgiveness is given. Congresswoman McCollum was followed by Congressman Tim Walz (introduced by Steve Sczallen) who, in his remarks, pointed out that the Turkish threat of removing permission for use of airbases and air-space is a political one. He stressed that our basic belief as a nation  to do what is right, requires that we, as a nation, need to affirm the Armenian Genocide as a Historical Fact because it is right. Max then played his last piece, Azat, which was followed by ACOM President Leroy Erickson giving some brief closing remarks and inviting all to attend the reception in Fellowship Hall hosted by ACOM.

During the program, it was evident that the people attending were intensly interested in all the comments, moved by the music, and filled with a spirit of companionship with each other and with the memories of the Armenian Martyrs of 1915. This was an impressive and moving evening.

The Commemoration was closed by Armenian Cultural Organization President - Leroy Erckson - with an invitation to attendees to join in a reception hosted by ACOM in fellowship hall.

A very successful and moving evening.

Enjoy this short trip with a bird's-eye-view of 18 popular sites in Armenia and Artsakh, now in 4K.