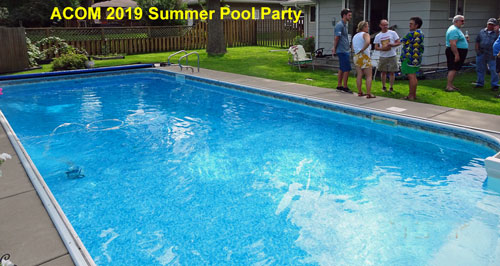 was held this year at Henry and Laurel Gregorian's Home.

They have a saltwater pool heated to 90° F so the swimming was phenomenal. Twenty four people attended this years event, with 7 of them jumping in the pool. Brats and Hotdogs were grilled by Leroy (keeping up his tradition as Pool Party Grillmaster). A variety of great salads and desserts were available as well as three  kinds of chips, a fresh fruit bowl, cherries and a delicious watermelon. Soft drinks and water provided by ACOM. Adult beverages were also avaiable provided by some of the attendees. The event was a great time to share food and friendship with Armenians and ABCs. A very sincere thanks to Henry and Laurel for hosting the party even though they were departing for Florida two days later.